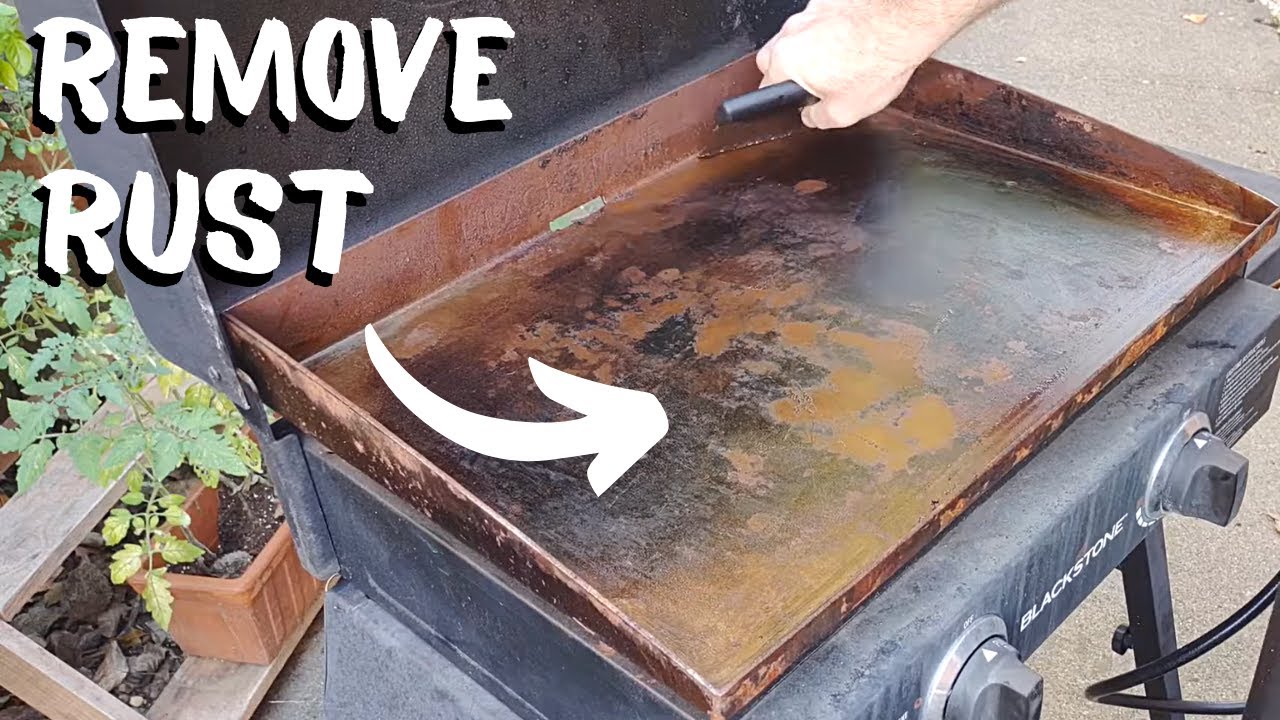 How to clean rust off Blackstone griddle? You need some tools and this easy guide to complete your work.

Since its invention, the Griddle has been a famous cooking tool. Griddles are ideal for cooking massive quantities of food at home or in a professional kitchen. They improve the efficiency of cooking.

Begin by gathering everything you’ll need to remove the rust from the Blackstone griddle. They are paper towels, cooking oil, metal scraper, cleaning bricks, steel wool, and grill stones.

When working with a hot grill, make sure your glove is heatproof.

Why Is My Blackstone Rusting

The iron skillet has been the most prone to rust. Once iron combines with oxygen and water, a red oxide is formed. Rust is one type of metal corrosion that is common and often irreversible.

When iron is exposed to water or oxygen, a mineral reacts to produce rust, the red oxide. Rust, after which diminishes the material by dissolving its particles.

This tends to make the Griddle more brittle and susceptible to certain other types of corrosion. That’s why it’s critical to treat the Griddle before it rusts.

A Blackstone griddle is designed to go on for a long time while remaining rust-resistant, making it ideal to use in an outdoor kitchen.

If Blackstone Griddles had already reached the end of their useful life, you could well realize rust accumulating. It’s important to note this is rust, which is caused by the skillet getting old. One delicious meal cannot be grilled on a brown and flaky surface.

How To Clean A Rusty Blackstone Griddle

The first step is putting on a pair of heat-resistant gloves, protecting your fingers and the heat. Preheat the Griddle. Allow it to sit for about 20 minutes.

It will loosen its rust and make it easier to remove. Now, you need to turn off your Griddle and set it aside to cool. Although the rust would not harden immediately, this is still best to clean it up as soon as possible.

One metal scraper would be required to remove all the rust from the griddle surface. You can scrape the top surface of your Griddle with the metal scraper, whereas the rust remains soft and has not even dried out. Your Griddle’s rust would then begin to flake off easily.

Remember to repeat this procedure until the metal griddle begins to feel smooth once rubbed with one scraper and no more corrosion is visible.

Clean The Griddle With The Grill Stone

You must first obtain the proper stone to scrub your Griddle with one grill rock. One side of the stone must be rough. This is preferable if it is lightweight and also has a handle. Users can also soil the surface with a pumice stone.

No soap is required; easily drizzle four oil tablespoons over the griddle surface and scrub with one grill stone. If you could not find any grill stone, use one steel wool or moderate grit wet/dry sandpaper instead.

To prevent damage to a metal surface, begin scrubbing your Griddle with slow and gentle circular movements. Once you’re finished, the Griddle must be nice and shiny!

Wipe your Griddle thoroughly with one cloth or paper towel to clean it. After carefully cleaning away the residue, add another three oil tablespoons.

Then it would help if you scrub with your cloth till the oil begins to clean off. Continue to use oil to remove rust from your Griddle until no trace amounts of rust remain.

Season this as your final step once the Griddle is rust-free and clean. Seasoning is important for preventing rust on your Blackstone griddle. It creates an extra, satisfying coating with a distinct flavor that does not scratch easily.

It guarantees that the food tastes the way this was intended to taste. The flavoring process leaves a protective layer on the Griddle’s surface that acts as one nonstick surface.

One seasoned Griddle would be simple to clean or not corrode. This means it would last for a long time and become more durable. Preheat the Griddle for about 15 minutes, or when the surface is dark and almost burnt.

Turn up the heat back up, and then let it smoke. This is all there is to it. Allow the product to burn at higher temperatures to form one bond between the oil and the metal.

After half an hour, the quantity of thick smoke would be minimal, indicating that the Griddle should be turned off.

The oil would be broken down by high heat, or the saturated fats would attach to create a new surface of molecules. The above layer protects the surface first from elements and acts like one moisture barrier. As a result, it tends to protect the Griddle from corroding.

How To Prevent Rust On Blackstone Griddle

Add one extra layer of oil after each cooking session. It only takes 4-5 oil tablespoons and one quick wipe down with one paper towel.

Coat the Griddle with one thin layer of your cooking oil. You may use whatever kind of oil you desire. If you’ve had a better quality oil, such as flax and olive oil, that’s fantastic! These oils would then cling to the surface of the metal better.

More importantly, the more users cook on the seasoned Griddle of oil, the stronger it will become. This improves not only the food flavor but also the cooking experience.

Have massive canvas protection for the Griddle created by Blackstone, including dual cloth to keep humidity out. When you’re not using the Griddle each week, inspect it at least monthly to ensure it isn’t rusting. This is preferable to prevent rust early on rather than later when it has completely covered the flattop.

If you’re not using the Griddle for more than a week, perform a quick checking at the start of the next month. Once rust is still in its early stages, removing it is better. Conversely, users must exercise extreme caution if it has already penetrated the metal.

We hope you can easily clean rust off blackstone griddle with the above steps.

This coating, when applied correctly, restricts food from going to the exterior and makes cleaning much easier. In addition, keep your Griddle in a cool and dry place. If you reside in a humid climate, keep the Griddle in a well-ventilated area away from your bathrooms.

Finally, do not forget to prepare some crucial things. Cooking oils that could be used include palm oil, sesame oil, olive oil, and others. Moreover, a clothing rag is frequently regarded as the best option for rags, and paper towels also work.